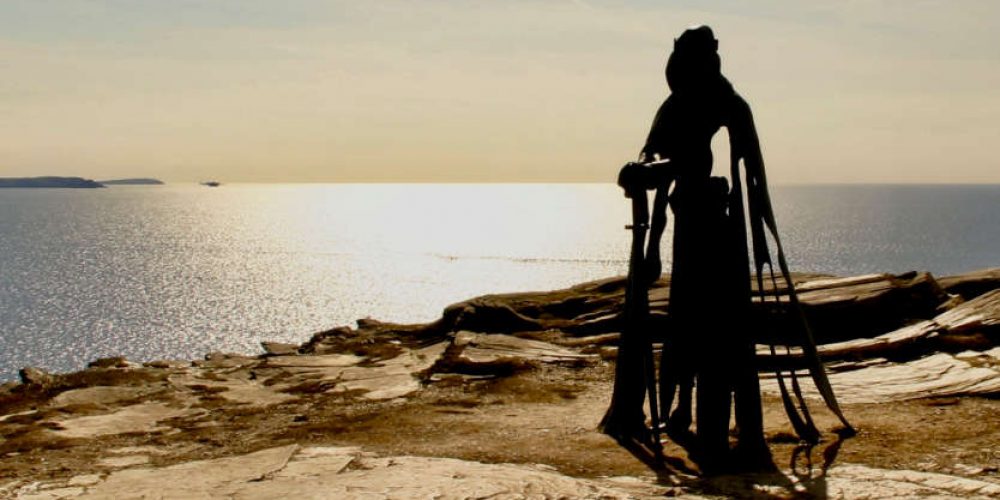 Located along the north coast of Cornwall, Tintagel Castle is steeped in mystery, magic and history. The first thing people think of when you say the name Tintagel is the legend of King Arthur, his knights of the round table and of course Merlin.

Every year thousands of tourists head to this mystical place to see Tintagel castle. The number of visitors means it is one of the most popular villages in the UK. Throughout history, the castle has inspired a whole host of writers and artists. Each looking to capture the hearts and minds of those interested in Arthurian legends.

Set high on the rugged coast, half on an island and half on the mainland, Tintagel Castle projects out into the sea. The castle has uninterrupted views of the sea whilst the waves crash upon the shore.

History at Tintagel dates back to Roman times, but it wasn’t until later that Tintagel became an important stronghold. Between the 5th Century and 6th Century, the castle’s importance significantly increased. This is evident from the number of Mediterranean artifacts that have been found at the site.

Tintagel’s links with King Arthur didn’t appear the 12th Century. The writer Geoffrey of Monmouth claimed Arthur was conceived by King Uther Pendragon and Queen Igerna at Tintagel. This association with King Arthur led Richard, Earl of Cornwall, to build the castle in the 1230s.

By the 17th Century the castle became pretty much deserted but its mythical associations with King Arthur have kept interest in Tintagel alive. The castle is now owned and looked after by English Heritage.

Admission to Tintagel Castle and the island is managed through timed tickets. It is therefore essential that you book your tickets in advance. It is the only way to guarantee access on the day and time of your choice. If you are unable to book in advance, there are still a limited number of tickets for sale each day. However, they are sold on a first come first served basis and sell out fairly quickly.

After over 600 hundred years visitors can easily access both parts of the 13th Century castle remains. Tintagel Bridge spans a 68 metre long and 58 metre deep rocky chasm. The new footbridge is a welcome replacement for the original bridge which disappeared at some point in the 15th or 16th Century.

Before the new bridge, visitors to Tintagel Castle had to climb steep and narrow steps. They also had to face long waiting times during busy periods to cross the narrow bridge at the base of the cliff. The new bridge is made from local material including tons of slate from Englands oldest working quarry located up the road at Delabole.

Merlin and Arthur are inextricably linked so it’s not surprising to find mention of him so close to Tintagel and the castle. In the cliffs below the castle is what’s rumoured to be the home of this most famous wizard of old, Merlin’s Cave!

The cave is famous because of Tennyson’s book called “Idylls of the King” In the book Tennyson describes the waves bringing Arthur as a child to the shore and Merlin carrying him through the cave to safety.

Tintagel was previously the name of the parish and not the village which was actually called Trevena. In Victorian times the village was renamed Tintagel.

It is thought Tintagel comes from the Cornish word Dindagell because Dindagell translates into “Fort on the Constriction”. This could, therefore, relate to the castle on the headland.

With the castle having such a close link to King Arthur it’s not surprising that the village is also entwined with the legend. Although the castle is the main attraction, there are many things to see and do in the village itself.

Popular for day trips and tourists, in high season Tintagel can be very busy. The village has a very good visitors centre with a whole host of information on the village and castle. There are also plenty of shops, selling all types of gifts, souvenirs, and locally produced food.

The Old Post Office is one of the major attractions in the village. It was built in the 14th Century as a manor house. The quaint house is owned by the National Trust and is definitely worth a visit.